For half a century, Joseph Medill devoted his life to news, social reform and his beloved Chicago, becoming one of the most influential publishers of the 19th century. In the 1850s, his abolitionist views led him to the founding a new political organization devoted to the abolition of slavery, which he named the Republican Party. He also turned the failing Chicago Tribune into one of the most powerful antislavery newspapers in the country, giving unwavering editorial support to Abraham Lincoln throughout his political career. After the Great Chicago Fire of 1871, he was elected mayor by the people of Chicago during their time of need. When Medill purchased control of the Chicago Tribune in 1874, he devoted the next 25 years to creating a powerful and independent source of news. Medill’s journalistic legacy would live on through his family, who would become some of the most powerful publishers of the 20th century.

Joseph Medill was born in New Brunswick, Canada, on April 6, 1823. At age seven, his family moved to a farm in Stark County, Ohio, where years of backbreaking farm work and his deep religious beliefs instilled in him a hatred of slavery. Medill spent his youth working as a lawyer, schoolteacher and antislavery activist who took part in political debates in favor of abolishing slavery. In 1848, Medill began courting Katherine Patrick, daughter of the publisher of New Philadelphia’s Tuscarawas Chronicle. She taught him the process of setting type and operating a newspaper. Medill said from the moment he smelled printers’ ink he felt it “inoculated into the human system and possesses its victim until death.”

Between 1849 and 1854, Medill published newspapers in Ohio, starting in Coshocton and then moving to Cleveland. During that time, all newspapers were political mouthpieces, and Medill used his to promote anti-slavery views. In 1853, Medill’s editorials voiced his displeasure with the Whig Party’s inaction to end slavery and he called for the establishment of an anti-slavery party.

After passage of the Kansas-Nebraska Act in 1854, Medill broke from the Whigs. He invited like-minded politicians and publishers to join him at a meeting on March 12, 1854, at the office of his newspaper, the Cleveland Leader. The group agreed to establish a new political party, and at his suggestion they formed under the name Republican. Its platform: “No more slave states; no more slave territory; resistance to pro-slavery aggression; slavery is sectional; liberty is national.” 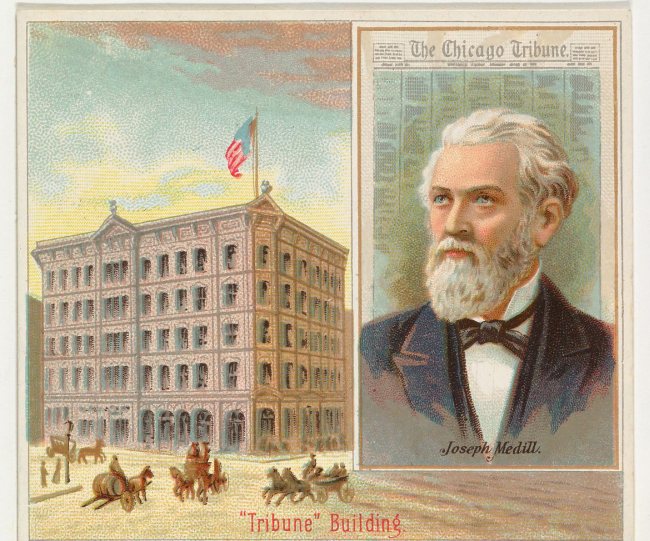 At the beginning of 1855, friend and fellow publisher Horace Greeley suggested that Medill “go West, young man, and grow up with the country.” Greeley introduced Medill to Dr. Charles Ray of Galena, Illinois, the publisher of the Galena Jeffersonian. Medill and Ray partnered to purchase an interest in the failing Chicago Tribune, in which they soon began publishing editorials in support of ending slavery. Tribune circulation quickly rose under their leadership and attracted the interest of Abraham Lincoln, who visited the Tribune and became a subscriber in early 1855.

The Tribune was vital to Lincoln’s political success, helping establish the Lincoln-Douglas debates during the 1858 Illinois Senate race. Lincoln thought the Tribune’s debate coverage was so accurate that he used it to publish his book, “Political debates between Hon. Abraham Lincoln and Hon. Stephen A. Douglas in the celebrated Campaign of 1858, in Illinois.” Tribune staff published pro-Lincoln editorials, defended him from negative articles, sent reporters to Lincoln’s speaking engagements and even advertised themselves as the “friends of Lincoln.” Lincoln lost the Senate seat, but through the Tribune’s support, the race made him a household name and focused attention on slavery as the major issue of the coming 1860 presidential election. The Tribune had by now established itself as the most powerful Republican newspaper in the West.

Medill helped secure Chicago as the site for the 1860 Republican National Convention. When the convention began, of the city’s newspapers, only the Tribune endorsed Lincoln. During the convention’s third round of balloting, Medill persuaded the Ohio delegates to switch votes to Lincoln, and in doing so, assured his nomination. The Tribune then went to work promoting Lincoln’s campaign. Medill assisted Tribune editor John Locke Scripps to publish Lincoln’s first biography and the Tribune’s support never wavered. The paper was critical, however, of his administration for lack of military aggression, delaying emancipation and allowing the purchase of military waivers.

Throughout the Civil War, Tribune staff answered their country’s call for military recruitment, including Medill’s three younger brothers who, like him, were staunch anti-slavery men. The Tribune also acted as a watchdog during the war, publishing articles that identified businesses that were illegally profiting off the crisis.

When the Civil War ended in 1865, Medill’s support for a national tariff and other political views resulted in his removal as publisher. However, he continued to be a major shareholder and editor at the Tribune and focused his efforts on enacting political reform. He served as secretary of the Republican Central Committee in 1866, and two years later was a delegate to the Illinois Constitutional Convention. In 1871, President Grant appointed him to the first U.S. Civil Service Commission.

That same year, on October 8, 1871, Medill was working at the Tribune when reports of a fire began. Despite assurances that the building was fireproof, he ordered the evacuation of the Tribune staff and equipment. As the Tribune building burned, Medill was already securing a new temporary building and presses.

On Oct. 11, as the Great Chicago Fire subsided and people returned to the area, they found only one newspaper for sale. The headline of the Tribune read, “Cheer Up…CHICAGO SHALL RISE AGAIN.” The headline brought hope, not just that the city would rebuild, but in Joseph Medill, as well. He was elected mayor and immediately began the rebuilding process. He enacted stronger building codes, built Chicago’s first public library and fought corruption within the Chicago Fire and Police departments. Under his administration, the first African-American police officer and Fire Squadron were hired.

In 1874, Medill purchased controlling interest in the Tribune with a $250,000 loan from friend and local entrepreneur Marshall Field. The Tribune, Medill announced, “will be the organ of no man however high; no clique or ring however influential; no faction however fanatical or demonstrative.”

In his later years, Medill sat on the Council of the Spelling Reform Association, fighting for simplified spelling, and led the creation of the Western Associated Press. He also used the Tribune’s influence to have Chicago selected as the site for the 1893 World’s Columbian Exposition, and then served on the event’s board.

Medill left a legacy through his grandchildren, who would become some of the most successful publishers of the 20th century. Medill’s oldest grandson, Joseph Medill McCormick, worked at the Chicago Tribune until he left to serve as a congressman and senator from Illinois. Medill’s next grandson, Joseph Medill Patterson, founded and published the New York Daily News. Medill’s granddaughter, Eleanor Medill Patterson, became one of the first female publishers of a major metropolitan newspaper with the Washington Times-Herald. Medill’s youngest grandson, Robert R. McCormick, followed in Medill’s footsteps as the driving force of the Chicago Tribune and became one of the most powerful media figures of the 20th century.

Knowing he was nearing the end of his life, Medill willed his newspaper to his family, ensuring it would live on. Hoping to improve his poor health, he traveled to his winter home in San Antonio accompanied by his grandson, Robert McCormick. He passed on March 16, 1899. Medill’s last words were fitting for a lifelong newspaperman: “What is the news?”

After returning from service in WWI, grandsons Colonel Robert McCormick and Captain Joseph Patterson decided to fulfill one of their grandfather’s lifelong wishes of creating a journalism school in the Midwest. What more fitting place than Northwestern University, where McCormick himself had been a student? McCormick and Patterson began negotiations with Northwestern to make Medill’s dream a reality, and in 1920, they reached an agreement to establish the Medill School of Journalism. For the last century, the name Medill has become synonymous with the highest standards of journalistic excellence. There can be no more fitting legacy to Joseph Medill’s lifetime devoted to journalism than the generations of journalists who have learned their trade at the school bearing his name–and who have carried out his call to “write boldly, and tell the truth fearlessly.” Further, generations of students who have led the fields of advertising, public relations and integrated marketing communications have also been educated and learned to tell powerful stories at Medill.

Author Bio: Jeffrey Anderson holds a BA and MA in history from Roosevelt University and wrote his master’s thesis on Joseph Medill. He has worked as the interpretation manager at the Robert R. McCormick House for the past 15 years. He has also taught on the Medill family for College of DuPage and lectured on Medill at the Conference on Illinois History.